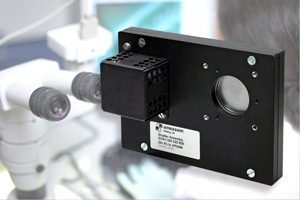 Magnet Schultz has developed a long-life shutter mechanism for a revolutionary, new assay system pioneered by medical diagnostics company, Pronostics. Replacing an existing US device, the innovative design technology has provided Pronostics with a shutter assembly that has extended the mechanism’s life from one million to over 10 million operations.

Pronostics has developed a range of revolutionary medical diagnostic products based on its core “multiplexing” technology, UltraPlex™, which enables barcoding at a molecular level so that large numbers of biological assays can be undertaken concurrently in a single container. This new technology, which is easier and cheaper to use than existing chip-based array technologies, drastically cuts the cost and time of performing diagnostics in hospital laboratories.

By attaching individual test molecules to metal microparticles, which are uniquely identified by physical barcodes, multiple tests may be tracked and analysed simultaneously. The assays are carried out in industry standard 96-well plates with liquid handling being performed by the UltraPlex™ SmartStation robotic system. Each well contains microparticles coated with the capture antigens and serum from one patient.

The captured antibodies on the surface of the microparticles react with target antibodies in the serum and imprison them onto the surfaces of the microparticles. In the final stage of the assay, samples are automatically analysed under a powerful microscope first using ‘white’ light and then switching to high intensity white light from below the plate. The assay plate is then transferred to the UltraPlex™ SmartReader where the microparticles are decoded and their fluorescence levels measured to identify the disease.

Each light source is fitted with a shutter mechanism to enable the light to be selected or obscured. Due to the frequency of the shutter opening and closing the US mechanism quickly wore out. Looking for a company to provide it with the engineering resources to develop a more robust and ‘drop-in’ solution, Pronostics turned to Magnet Schultz.

Once this had been achieved, the task of specifying the performance requirements of the assembly began. This included the operating speed and stability of the shutter, the heat dissipation characteristics of the assembly and light attenuation. In addition, the company also needed to focus on the operating life of the shutter mechanism, electrical power consumption and vibration characteristics.

Key to the success of the project was the selection, adaptation and manufacture of a suitable rotary solenoid to drive the shutter mechanism. As the world’s leading solenoid manufacturer, Magnet Schultz was in a unique position to develop the ultimate solenoid for the mechanism.

With the solenoid development completed, attention turned to designing the assembly parts. This involved preparing detailed drawings and designing and developing all assembly parts. Magnet Schultz then manufactured and produced prototypes before final testing was carried out to assess functional performance and longevity.

“Magnet Schultz has done a magnificent job in developing the new shutter systems”, said Chris Savory, European Sales Manager at Pronostics.  “Previously we were using an US manufactured shutter which was not only very expensive but also wore out very quickly. Magnet Schultz’s new shutter is a excellent alternative, providing ten times the longevity and costing substantially less.”

Pronostics now has a supplier with a detailed understanding of its UltraPlex™ system. Magnet Schultz is maintaining a file of its shutter innovation to support further development should greater levels of performance be required.